Geo-Engineering & Testing was established as a Guam corporation in 1975 under the leadership of its principal engineer Ukrit Siriprusanan, who holds Bachelor and Master's degrees from University of California at Berkeley, and has had previous experience working with a national geotechnical consulting firm headquartered in Northern California. Geo-Engineering & Testing grew from 4 employees in 1975 to more than 30 employees today, with the addition of a subsidiary drilling company, Marianas Drilling Inc. and a Saipan corporation, Geotesting Inc.

Geo-Engineering & Testing is the only major geotechnical engineering company west of Hawaii with accredited constructions materials laboratory. The company have been providing geotechnical engineering and construction materials testing of soils, rocks, concrete, and asphalt paving mixtures, to Guam and the Northern Marianas Islands of Saipan, Tinian, Rota, Federated States of Micronesia, Republic of Palau, and Marshall Islands, for the last 33 years and have satisfactorily performed services for thousands of projects throughout various nearby islands, though mostly on Guam. 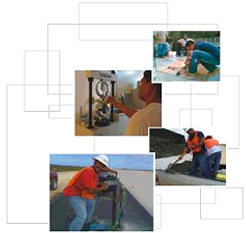